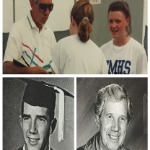 Lowry Bishop – Lowry Bishop dedicated himself as both a coach and social studies teacher to the students and athletes of Fruita High School and Fruita Monument High School from 1961 to 1992. Coach Bishop mentored student athletes as an assistant football coach for six years and was a member of the 1966 coaching staff that won the Wildcats only football state championship. He was also a member of the football staff that finished as state runner-up in 1963, 1964 and 1965. Coach Bishop served as an assistant basketball coach for five years from 1961 to 1966 and was the head coach through the 1966 to 1970 seasons. He coached baseball for ten seasons and was a coach on the 1970 Class AA State Championship team. He also served as the head boys and girls tennis coach for 18 seasons until his retirement in 1992. In 1990 Mr. Bishop was named the Outstanding Educator of the Year by the Grand Junction Area Chamber of Commerce.